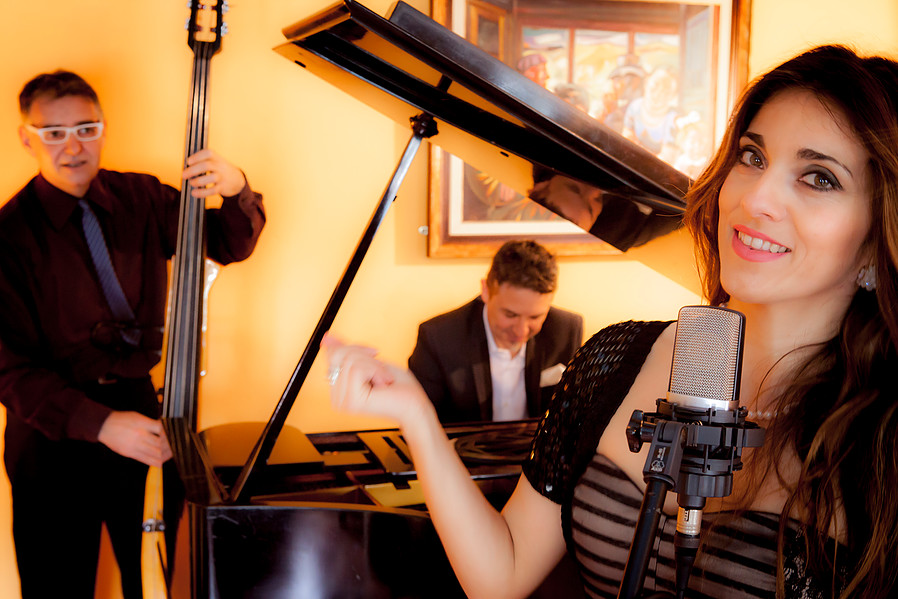 MARIA JOSÉ CASTAÑO (Singer) Coming from Marbella, she began her career as singer in concert halls and luxury hotels in Spain. As time passed, she traveled around other countries where she combined her work with singer studies. Her talent is very special, she developed an impressive vocal range over the years and she can make any song her own. She's professional, passionate, versatile and fun to be around. She has skills in jazz, blues, funk, rock, pop, rap, hip-hop, R & B, latin, world and soul music. with high quality voice, rich in tone and pitch, this “Malagueña” signs in English, Portuguese, French, Italian and Spanish. She can adapt to any situation and her charisma is undeniable. She's been singing around the world since 2006 in 5-star hotels and cruise ships.

MANUEL VÁZQUEZ (Pianist, Keyboardist and Musical Director) Born in Barcelona, is a musician specializing in Classical and Jazz Music. Graduate of The Royal Higher Conservatory of Music of Madrid and Jazz Taller of Musicians. Arranger, Composer and Teacher. A winner of a range of prices and has received various honors and recognition. He was director and teacher of different Conservatories of Music. He has conducted like piano player numerous concerts and recitals in various theaters, concert halls over a wide range of locations national and international. All of this is just a highlight of the talent of this qualified musician. He give concerts around the world, pursue a master's degree as Musical Director . Has been performing around the world since 2002. FRAN GUEMALMAZIAN (Guitarist and Singer) With French nacionality is a great guitarist and vocalist which is also a musical compositor and arranger for various musical projects. He worked as a Guitar Teacher for various ages and levels in the Ateneo de Música y Danza in Fuengirola (Málaga) and performing in different places around the world like France, Maroc, Portugal, Dubai and Spain. He can sing in English, French, Italian, Portugues and Spanish.

MANUEL SÁEZ (Double & Electric Bass, Guitarist and Vocals) Born in Buenos Aires, Argentina, studied music at the Music Consevatory of Málaga. For the past ten years, Manuel have been an active member of the music scene in Granada (Spain), playing in many jazz, pop and groove projects. He has been performing both on electric and acoustic bass and guitar all over Europe and Morocco. He was a session musician for artists such as Agustin Carrillo, Keru Sanchez o Daniel Casares group, and participated in numerous international tours visiting amongst others, Berlin, Paris, Shangai (2008 a 2011). He also participated in colaborations with Jorge Pardo. As a composer he worked for Warner Bros Park Madrid.

SERGIO DÍAZ (Drums, Percussionist and Vocals) Is a drummer whose youth is not going according to the maturity that has as a musician. His drumming is as versatile as effective and knows solidify the band, while providing creative musical elements, dynamic and subtle. In his musical wanderings have left their mark at several venues in Madrid, Barcelona, Sao Paulo, most recently in Tokyo (Japan) and the month of October in Rio de Janeiro.