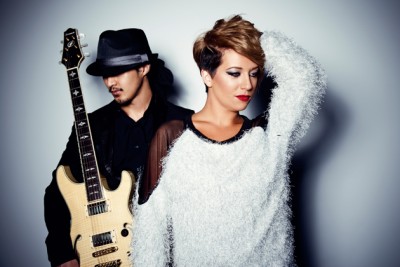 Kyrah was born in a small town in New South Wales, Australia. She was introduced to music at a very early age. A passionate and talented music student at The Australian Institute Of Music, Kyrah earned herself a Distinction for her graduation recital. It was in her final year of study that she joined a band called ‘Femme Da Funk’ that regularly played in venues around Sydney. The band worked up quite a name being offered gigs at The Sydney Royal Easter Show, The Basement, The Star Casino, The Beresford, the NRL award night and more.

In 2011 Kyrah and Duo partner (Femme Da Funk) auditioned for the Xfactor, Australia. They received four yeses from the judges and made it into the top 6 groups. Travelling to America while filming Xfactor was a massive achievement for kyrah, working closely with international artists such as Leona Lewis, Joel & Ben Madden and Ronan Keating. The experience has definitely given kyrah priceless knowledge about the industry and how it works.

In the two years that have past since Xfactor, kyrah has built up a pretty impressive list of artists she has played alongside of, including, Slash (Guns & Roses), Labrinth, Marcia Hines, Timomatic & Ronan Keating just to name a few. Kyrah has also been invited to sing at some of the biggest corporate events in Australia including Rolls Royce Launch of Wraith (Sydney & Melbourne), Aston Martins Birthday (Sydney & Melbourne), ANZ Stadium, Michelle Bridges 12WBC after party & more. Kyrah has just released a new single called ‘True (for the rest of my life)’.

It’s about staying true to yourself and the things that make you happy in life. Kyrah has received over 5000 plays online and it just keeps getting better. Kyrah is a real artist making real music about real events, her sound is unique, and her tone is made of smooth velvet. You can expect to hear a lot more from Kyrah this year with plans to release an album toward the end of the year.