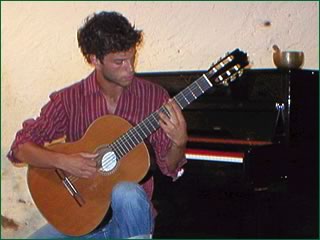 A charismatic performer and entertainer Tiago is now trying to assert himself as a performer in the Australian Music scene, working with an engaging repertoire ranging from Bach to contemporary compositions and always trying to bring to the audience music with some kind of connection to popular roots making it easy for the listener to identify even with the most challenging works.

Tiago Brissos started his studies of classical guitar in the Music Academy of Evora, Portugal, where he studied with Jose Diniz and Jose Farinha. After completing his studies at the Music Academy of Evora Tiago initiated his Licentiate Degree in Music Performance at the University of Evora where he had the chance to learn from renowned guitarist Pedro Joia. Tiago completed three of the five year degree and moved to the Superior School of Arts of Castelo Branco where he studied for 3 months with international guitarist Miguel Carvalhinho just before he immigrated to Melbourne, Australia.

During the time Tiago lived in Portugal he had the chance to study and attend master classes with the leading guitarists of his country and established himself as an aspiring young performer, touring through the country in solo performances as well as in numerous chamber music formations. Of these collaborations it is of particular interest the duos with Soprano Joana Godinho and Cellist Valter Marrafa with whom Tiago performed extensively for 3 years. During this time Tiago also collaborated several times in theatre productions and cross artistic projects either as a gest performer or creating the music for the performance or exhibition.