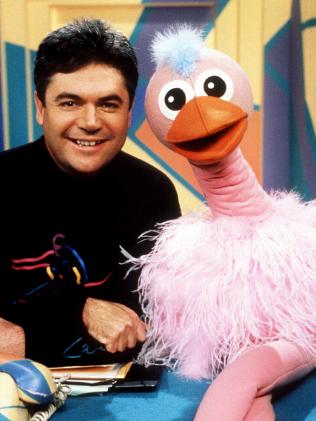 Born in Melbourne in 1951, Daryl Somers (or "Dazza" as Sonia Kruger likes to call him) made his first appearance on television as a contestant on the talent show New Faces in 1968, aged just 17. The teenage drummer sang with the band he’d formed at high school. They made the final but came second to now famous singer John Williamson. Undeterred, two years later, in 1970, the nineteen-year-old won the New Faces final as a solo vocalist.

Daryl made his professional television debut as the host of the afternoon kids’ show Cartoon Corner on July 14, 1971. Each weekday for the next six and a half years he entertained school kids, who would become his biggest fans as adults. October 9, 1971 saw the birth of Hey, Hey It’s Saturday, which Daryl co-hosted with Collingwood footballer Peter McKenna. Eight weeks in, McKenna was replaced with a stuffed pink ostrich named Ossie, giving birth to one of the most famous partnerships in Australian TV history. Over the next 28 years, Daryl and Ossie became household names.

The duo graced magazine covers, won a multitude of Logies and even had toys marketed in their form. In 1976, Daryl, who played with his band Somerset, hosted the revived music program Bandstand. The exposure quickly made him a teen idol. He hosted the King of Pop Awards in 1976 and 1977, and was a regular singer on the Graham Kennedy, Don Lane and Mike Walsh shows.

The eighties were frenetic. In 1980, Daryl replaced Tony Barber on quiz show Family Feud, hosting the program for the next three years and 713 episodes. In June 1982, he was given his own night time TV variety show – minus Ossie – aptly named The Daryl Somers Show, which ran for 18 months. The hard work paid off with Daryl winning his first Gold Logie Award for Most Popular Personality on Australian TV in 1983.

No longer hosting Family Feud and with The Daryl Somers Show finished, 1985 saw Daryl free for a new challenge – the revived Blankety Blanks. Hosting the early evening quiz show each weeknight put him back in the popularity stakes, with Daryl winning his second Gold Logie in 1986. In 1988 he hosted the TV Week Logie Awards for the first of five times. He was invited back in 1991, 1996, 1997 & 1998.

His third Gold Logie came in 1989, marking his place in Australian showbiz history. Ironically, New Faces – the very show he appeared on in 1968 – returned to TV in 1989 with Daryl as host and producer. An astute businessman, Daryl grew from musician to TV presenter and then producer, forming his own company with Ernie Carroll – the voice of Ossie Ostrich. Somers Carroll Pty Ltd went on to own and produce Hey Hey as well many Hey Hey specials and later the comedy series The Russell Gilbert Show and Gonged But Not Forgotten.

November 21, 1999, marked the final episode of Hey, Hey It's Saturday which won a record amount of Logies; 12 awards in the comedy/light entertainment category, and Daryl's 17 other individual awards - including the three prestigious Gold.

He is a patron of many worthy causes including; Camp Quality, The Lost Dogs' Home, the West Australia Youth Jazz Orchestra (WAYJO), Generations in Jazz, Kids Under Cover, and Yarrabah Special School.

He is married to Julie da Costa, a former senior artist with the Australian Ballet.  Earlier this year, Daryl was awarded a Medal of the Order of Australia on Australia Day. Hosting series one of Dancing with the Stars in late 2004 for the Seven Network marked his return to television after a five year absence. Daryl also hosted series two and three in 2005, often attracting more than two million viewers each week. In November 2005, he released a CD Songlines with SonyBMG.