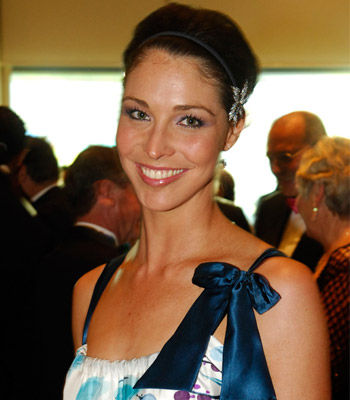 With her trademark million-dollar smile firmly in place and an Olympic Gold Medal and World Record to her name, Giaan Rooney had a stellar international swimming career. Giaan was destined for greatness since her stunning 200m Freestyle victory in 2001 at age 20. This victory was described in The Australian as “not so much of a step as a Beamonesque leap into the future” (30/7/01). Giaan burst onto the international scene at the age of 15, winning Gold in the 100m Backstroke at the 1998 Commonwealth Games.

She demonstrated her versatility at the Sydney Olympics, finishing the meet in style with two Silver Medals from the relay events.

Giaan showed in her Gold Medal winning 200m Freestyle performance at the 2001 World Championships in Japan, she is every bit a world-class swimmer with willpower to burn. As a testament to her ability she was awarded the Queensland Female Junior Athlete of the Year in 2001.

Arguably Giaan’s greatest achievement to date came as a key member of the 4x100m Medley Relay team at the recent 2004 Olympic Games in Athens. As the lead swimmer Giaan clocked an Australian 100m Backstroke record, and a little over 3 minutes later became an Olympic Champion and World Record holder as the team smashed the previous record set during the Sydney Olympics by the United States.

Giaan continued her record breaking form at the 2005 Telstra Australian Championships, adding to the 100m backstroke Australian Record she set earlier in the meet with a Commonwealth Record in the 50m backstroke. Giaan is Australia’s leading female Backstroker of recent times and has enjoyed success equal to her hard work and resolve.

Following the 2006 Commonwealth Games, Giaan Rooney retired from competitive swimming to focus on a career in media. Since leaving the pool, she participated on Torvill and Dean’s Dancing on Ice as well as making appearances on the Today show, What’s Good For You and Getaway.